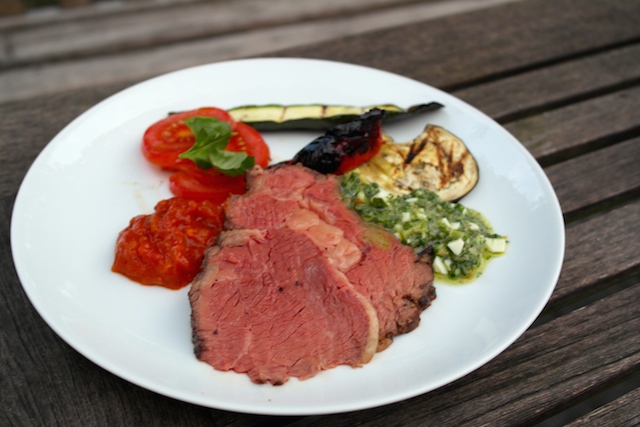 …and the introduction of “Big uncle Tom”

While visiting my grandma in Germany with the kids, I was not only spoilt with the great rolled pork roast my mother prepared, but also with a great family BBQ at the house of Big uncle Tom. I had a nice piece of ribeye in the luggage – my favourite kind: Irish Hereford, dry aged. A couple of times a year I get a piece like that, and normally, I slice it up in 250-300g steaks, vacuum those and enjoy them at one of our many BBQs.

Just before leaving for Germany I bought another piece of ribeye. With 2,3 kg a bit smaller than usually… and thought that it would probably be nice to try to grill the whole piece instead of making steaks from it. The perfect meal for the family BBQ in Germany I was looking forward to – so the ribeye went into my suitcase and travelled the 770 km to Kulmbach with me and the kids. And for Timo, who was going to stay at home, it was even harder to say good-bye to us 😉 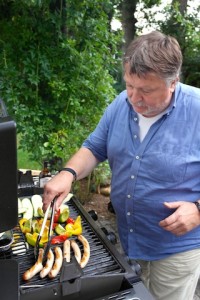 My uncle Thomas, who is expert in preparing meat and especially roasts, was pleased with the unusual content of my luggage and immediately up for grilling it in one piece. A time was set, tasks divided between him, my aunt Isolde, my mother and myself. But before going into the details, I want to take the chance to properly introduce him. You already got the chance to read about my mother Christine last week, so now, meet her brother and my “Big uncle Tom” here.

It was clear that the ribeye should be the protagonist, the “hero” of the dinner. So we decided for grilled vegetables, tomatoes and 2 sauces to accompany the meat. While Thomas started to prepare the ribeye for the grill, Isolde was preparing the barbecue sauce and my mother chopped herbs for her Salsa Verde. I took a stab at the veggies, but mainly went from one to the other with my camera to not miss any step of the process.

The idea was to get to a perfectly grilled, medium rare piece of meat and whilst we didn’t know exactly how long it would take, we knew it would take some time. Thomas grilled the ribeye at high heat on all sides so and then set the BBQ to 120°C. We put a thermometer into the meat and decided we would take it off the grill at 52°C core temperature (as it continues to heat up while resting) – it took almost 2 1/2 hours, so we had enough time to enjoy a glass of champagne or two whilst finishing the side dishes. A perfect family afternoon in the kitchen!

So after about 3 hours, the rest of the family had arrived and finally, it was time for the “moment of truth” – did we get to the medium rare result we were after? We did! And it tasted delicious (proven by the fact that with 8 adults we almost finished the whole ribeye). And Isoldes BBQ sauce and the Salsa Verde were a perfect fit, I can only recommend you to try those. You can make a big batch of BBQ sauce at the beginning of the summer and freeze it in portions. 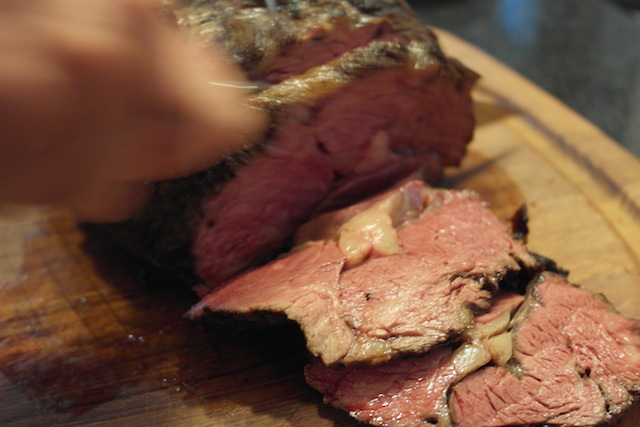 Recipe for an entire grilled piece of Ribeye 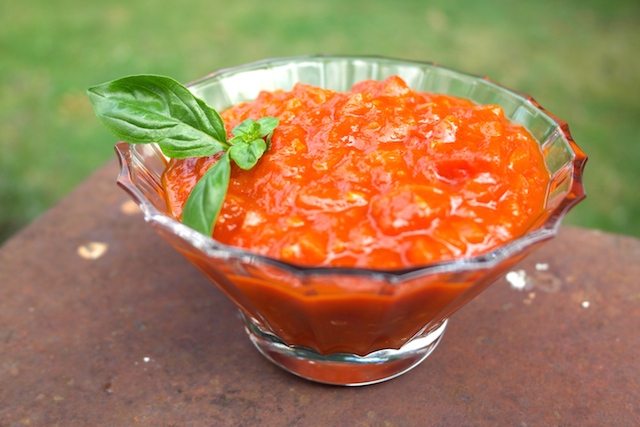 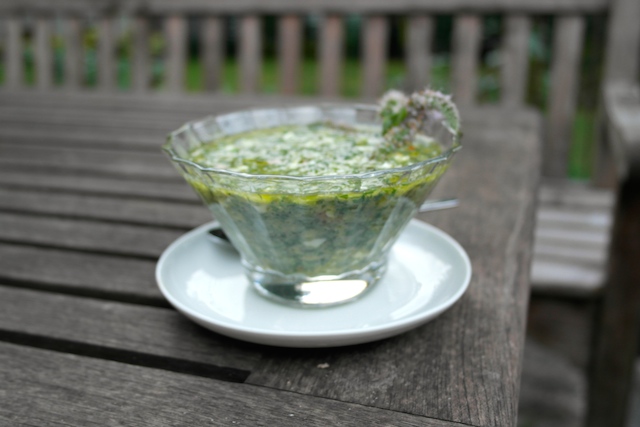 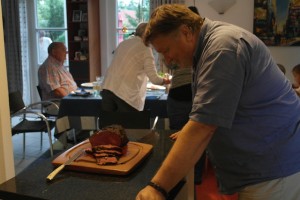 Thomas’ secret for the perfect result: a few seconds of intense ribeye contact