…it’s this time of the year again! 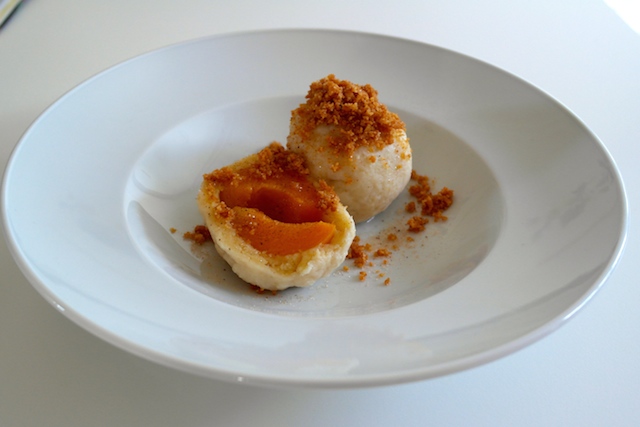 Marillenknödel… when I think of them, I think back to one of the many summers my sisters and I spent at my grandparents house in the south of Germany. My grandparents both grew up in Sudetenland/ Bohemia, which now is Czech Republic. They left during the second world war and lived in Kulmbach since, but the food in our family was and still is very influenced by the bohemian cuisine, e.g. Gulash, bohemian dumplings, pork roast,  Powidltaschen and more. And Marillenknödel, of course. “Marillen” is the word for apricots, “knödel” means dumplings. My grandma is great in making those and a few years ago, she shared her recipe with me. So this is the first real revelation of a family secret 😉

There are many different ways of making Marillenknödel, some prepare the dough only based on potatoes, some based on quark (apparently one more of these ingredients that are quite local and hard to translate… the translations I found are either also “quark” or a low-fat cream cheese for cooking). The version of my grandma is a combination of both. By the way, you don’t need to stick with apricots at all – the dumplings are also delicious with plums (in that case “Zwetschgenknödel”) or with Cherries (“Kirschknödel”). 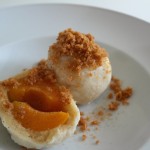 But in any case, what makes them irresistible is the topping they are eaten with: breadcrumbs, roasted in lots of butter and finally a dash of sugar and cinnamon. As you can tell from the description, it is a quite filling dish – rather a sweet main course than a dessert. But I’ve also already made mini versions of the Marillenknödel and served them with ice cream as dessert.

So, in case you don’t know Marillenknödel, they might sound a bit exotic to you… but I promise, once you try them, you fall for them. And probably, your kids will, too 🙂

« I have never ever cooked a chicken soup before
Welcome to the new version of FoodFamily! »