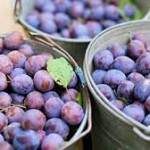 After harvesting about 30kg of prune plums from the tree in their garden, our mother brought several jars of powidl to all of us. Do you know powidl?

Powidl is a traditional spread for bread made of plums, strictly speaking prune plums – a sort of plum which is quite slim, compared to the original round-bodied plum.

Powidl is common in Middle and Eastern Europe, mostly related to Austria, but originally coming from the Czech Republic (povidla). Different from jam, it is boiled down to a very thick mass without sugar, preservative agents or other food additives. Being highly concentrated, it is preserving itself and is incredibly imperishable. appearing black rather than purple.

Historically, cooking Powidl has been a way of conservation, the end product being firm- up to cut resistant. Before use, the spread can be thinned down by boiling it up with rum or orange juice and it can be refined with lemon zest, cinnamon, vanilla, whatever you like. Anise matches very well, too.

And here is the original recipe:

You can also do all this in stages over 3-4 days, each time about 2-3 hours. In total you will need 6-9 hours before you`ll be done with the powidl.

My mother was doing the whole thing in a large roaster in the baking oven at 180°C, saying that this works very well, with the advantage of not having to stir all the time, but only sporadically.

And what can you do with powidl?

Quite a lot; of course, you can just use it as a spread on your bread – many people love this. To tell the truth, I prefer it as a filling for pastry, we will give you two possibilities for use here on our blog. The Austrians also use to fill their „Germknödel“, i.e. Yeast dumplings with it, serving it with poppy seeds and hot butter – delicious!!! I decided to try out something new – a variation of a “Linzer Torte”. 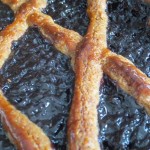 The “Linzer Torte” is a quite famous Austrian specialty. Besides Linzer Torte, there are also ‘Linzer cookies’, one kind of christmas cookies my Grandmother used to bake every year. Do they have to do one with another?? I don`t know! But probably it is just the name, as the dough is not the same, neither is the kind of jam. However I can recommend the cookies, too! But let us stay on track..
Last time I made Linzer Torte, I have not been aware of the fact that the cake is getting better from day-to-day (ok, one day it might go bad;-) but you can store it for a really long time, ideally in a tin. I served it on the first day and the pastry was jumping off the fork – being too crispy. Only one day later it was getting mellow by the jam and that was by far better!
By the way, the original Linzer Torte is filled with raspberry jam – which tastes also very good. This time, I filled it with the powidl and was very enthusiastic about the result. You must try this! 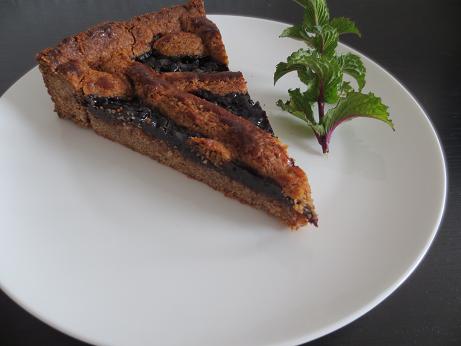 Prune plums – why are they so healthy?

You’re right, a cake is a cake and rarely healthy by itself. But after all, the powidl filling contains plenty of prune plums and those are not just delicate but also extremely healthy, containing a large number of mineral nutrients like magnesium, calcium, iron, zinc as well as vitamins, e.g. the vitamins B1 (Thiamin), B6, C, E, folic acid and carotin.
Feel free to indulge in this delicate purple stone fruit, even though it is hidden in pastry as you are at the same time ingesting all these healthy ingredients mentioned above. But be aware of the side effect – prune plums can stimulate your digestion;-)