Last Sunday was FoodFamily time again. In the literal sense! 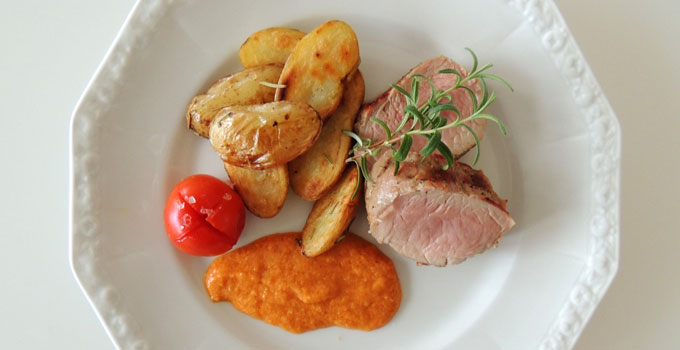 My mother came over for lunch and this time, she was our guest. (Of course she still helped me in the kitchen), but most of the preparations were done before she arrived. You know by now, that cooking together is our all time favorite. I decided to prepare a filet of pork. Usually I prefer to make it with the low temperature cooking method, simply because the result will always be a juicy and not at all dry meat. This Sunday there was not enough time though, so I headed for an alternative and grilled the filet on our BBQ. Better to say, Hubert grilled it and it was equally tasty, juicy with a nice, brown crust from the outside. It was the first time I tried the pepper rouille and I can ABSOLUTELY recommend it! (Just had the leftover spread on my bread for tonight’s dinner, yummy). I I found the recipe in our BBQ bible (Weber’s Grillbibel) and I will definitely cook it again. It really goes well with all kind of BBQ meat.

Beside the very successful main dish, I also wanted to serve a Tarte Tatin for dessert with home-made ginger ice cream. Unfortunately it was a complete failure and I will spare you the pics. The other day I also prepared an Apricot Tarte Tatin, which at least tasted very good but not appealing enough to show for the blog…Maybe we will soon launch “failure section”, you only learn from mistakes, right?

Grilled Filet of pork with pepper rouille and rosemary potatoes