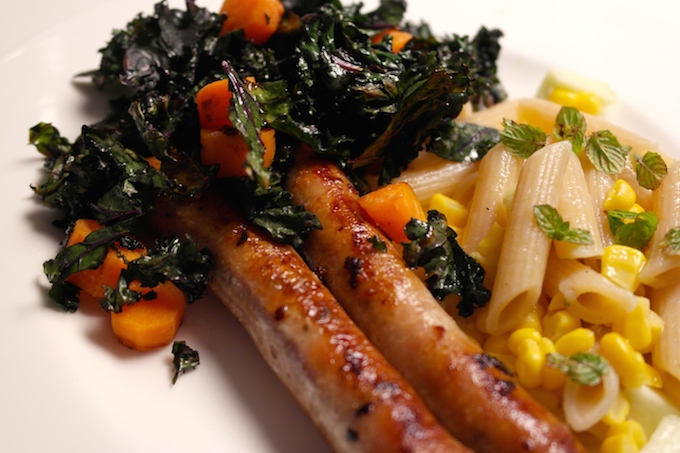 Whilst we are still enjoying some nice and sunny days here in Copenhagen, autumn has clearly arrived. I actually really like it – it means nice walks in the forest with our dog who’s chasing the falling leaves and the kids who are collecting chestnuts. And afterwards some nice comfort food to warm up…

One thing I really like during the colder months is curly kale. It is quite popular in Northern Germany (“Grünkohl”), and traditionally served as a stew with cured ham, smoked sausages, potatoes (and often lots of schnaps alongside). But it is not a purely German tradition. I found out that many of the northern countries have their own curly kale traditions – here in Denmark it is called “grøn-langkål” and eaten at new years eve and in Holland it’s “boerenkool”. But even countries like Italy and Portugal use the kale in some of their popular dishes such as ribollita and caldo verde.

As I recently started to work again, time for food planning and actual cooking got a bit more limited. I had already in the past taken advantage of a really good “convenience concept” that is offered by a company called Aastiderne here in Copenhagen: they deliver weekly food boxes with ingredients for 3 meals, including the recipes. The content is very seasonal and also balanced, normally containing 1-2 meat dishes and 1 fish recipe. There are different possibilities – I normally chose the “Quick Box” which means 30-40 minutes of work for a good evening meal including lots of vegetables. I don’t only like the convenience aspect, but also the fact that it adds some variation to the normal week-day dinners. Different ingredients, and recipes which force us (and the kids) to try something new.

And here we close the loop to the curly kale again (…you might have wondered…). It was one of the ingredients of last week’s box – and it was not meant to be cooked or stewed, but roasted instead. I was a bit sceptical, but positively surprised. Roasting it together with some crunchy carrots at high temperature gave it a very special taste, it got quite crispy and with some salt flakes on top could almost qualify as kale chips. The lamb sausages went very well with it, but any other sausages (thinking salsicca, for example) would work well. The pasta salad served on the side felt like a bit of a weird combination when I first read it, but actually the sweetness of the apple and the sweetcorn in combination with the freshness of the lime juice worked well. And most importantly – the kids really liked it, despite the word “salad”! 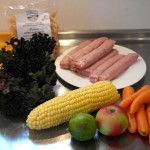 « Tuscany – a food blogger’s paradise
Green smoothie – Popeye would have loved it! »