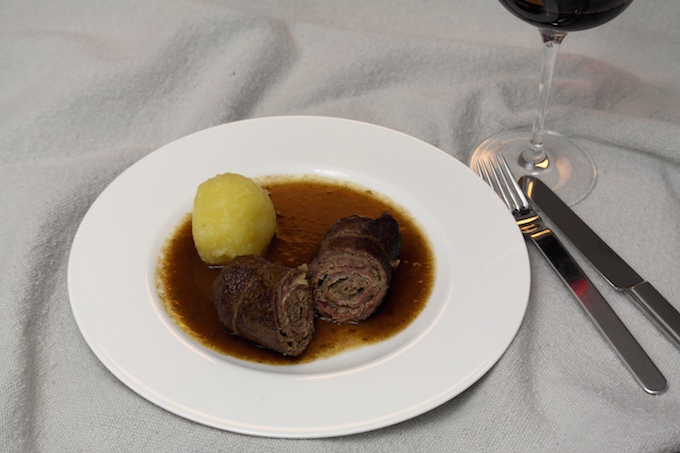 German Beef Roulades are one of these dishes, that awake childhood memories, because they are the kind of food German grandma’s used to serve on Sundays. Well, in my case, my mother and my father also master them with perfection. But they are definitely not something I had in my repertoire as a student, or actually, until very lately. Now I live abroad since over 10 years, and once in a while there are these cravings for “food from home”. The challenge with Beef Roulades is, that the right kind of meat is hard to get – when no German butcher, who knows how to cut the large slices out of the beef shank, is around. I once tried to explain it once to my good and trusted Danish butcher, but the result were HUGE  roulades, because the meat was cut way too thick.

So when I visited my Grandma in Kulmbach in southern Germany last time, I went (as always) meat shopping at one of the best German butcher’s I have seen. I left the shop with no less than 5 kg of meat and plenty of good German cold cuts on top. As always, I bought the famous “Kulmbacher Bratwürste” (the best sausages ever), but this time also a couple of kilo of beef for Goulash and… 6 nice, large thin slices of beef for roulades. And the nice lady in the shop was so kind to also offer me some beef bones – perfect to create a good sauce.

Back at home, I decided to prepare the Beef Roulades the traditional way: with a filling of mustard, bacon slices and onions, and serve them with a good gravy and potato dumplings. The very traditional way also involves pickled cucumber… but it’s not my thing, so I left them out. There are numerous other ways you can stuff your roulades, with plums, other vegetables or “mediterranean style” like the mediterranean beef olives with feta cheese and red pepper Katja posted last summer.

I can already know promise that another recipe of beef roulades will follow soon – with a twist, as learned during the cooking class I recently joined with my mother and sisters at the German Michelin Star chef Hans Haas: we made the roulades from beef jaws, and the result were great and tender roulades.

I served the roulades to friends of ours, a Danish/ Italian couple… Sometimes the traditional German dishes are a bit polarizing. But not this time – all plates were empty and the guests happy. 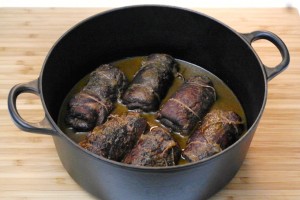 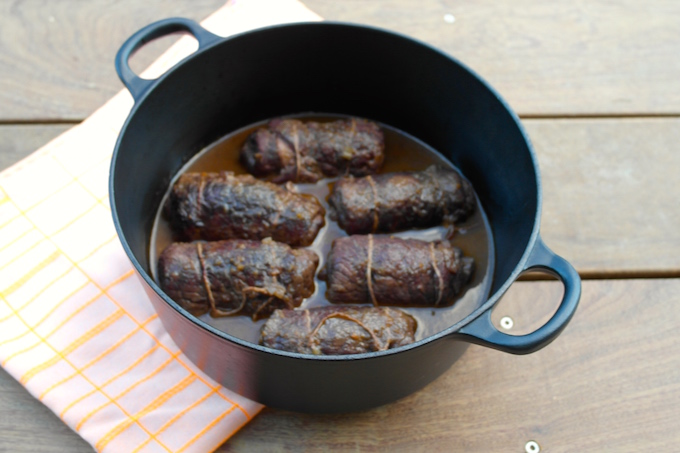